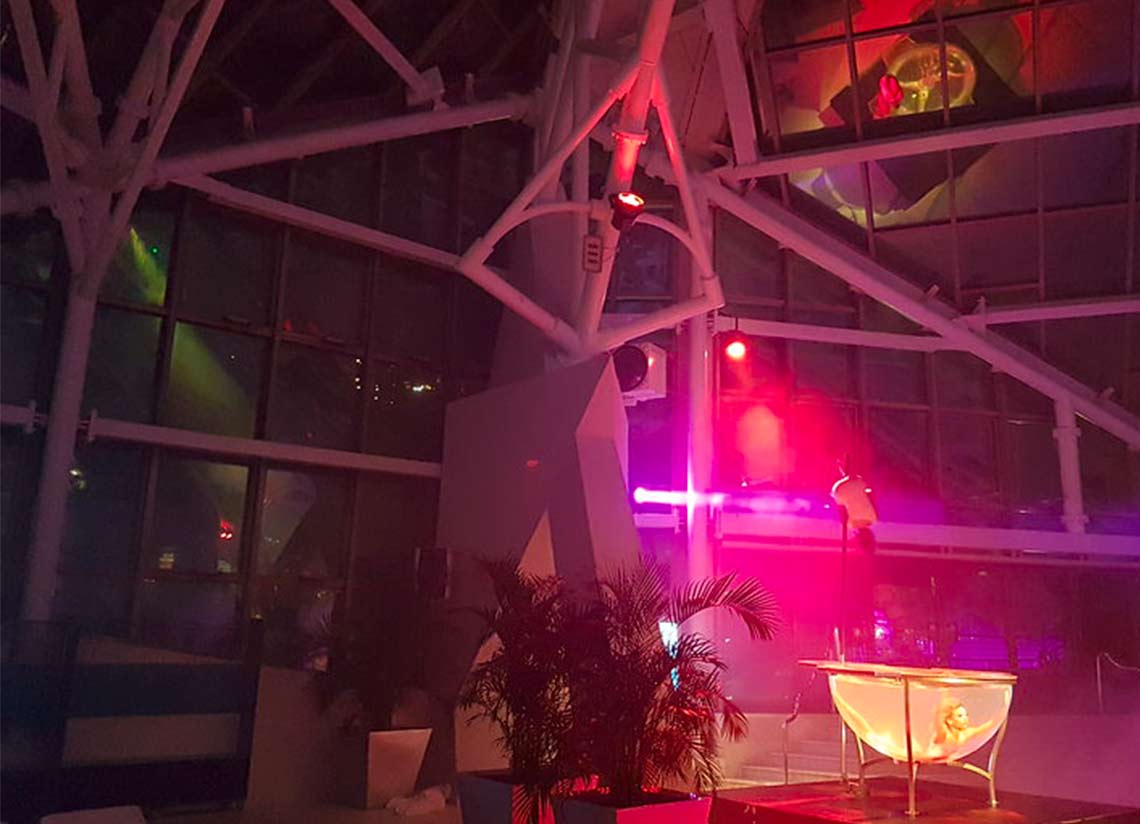 So you haven’t seen the new CALDEA night show yet? Well, you’re already leaving it late, as there are only 15 days left to enjoy this musical extravaganza in a unique setting… 😃.

Summer nights in CALDEA are on another level until 25 August. You can start with the Cocktail Night in Inúu at 21:40, featuring a live performance from violinists Javi Lin and Silvia Carbajal. Then move on to an exclusive show while you savour one of the cocktails we will give you… and after that, the party keeps on going!
At 22:05 in CALDEA’s central lagoon, the stage will be set for SPACE, the Aquabowl show featuring Paola Quistini and Ada Ossola. You’ll notice that we have raised the stage this year to allow you to fully enjoy this live show that combines different performing arts—music and water acrobatics—while bringing technology into the mix with an interplay of water and light.

Javi Lin is in charge of bringing music to our ears with his electric violin. He first gained notoriety in 2016 when he made it to the final of Tele 5’s Talent Show, Spain’s Got Talent. He captivated every viewer with his unique way of playing his instrument, covering everything from modern pieces to more classical themes. During his career he has played with groups like Maldita Nerea and artists like Ara Malikian. He is a music enthusiast, and has been practising this discipline since he was just a child; it’s in his blood as his mother is the soprano Meina Chen.

Silvia Carbajal accompanies him during the live concerts in Inúu. This well-rounded artist can handle any genre with her violin: classical, pop, rock, jazz, swing, country and, above all, electronic (dance, house and tech house). She has worked with national Pop and Rock artists including Paula Rojo, Ainhoa Cantalapiedra, Manuel Carrasco, Pablo López and Litus. She has also been featured in advertisements for Nike alongside Cristiano Ronaldo, and has racked up numerous collaborations and performances on both radio and television (El Hormiguero, Late Motiv, GH 15, Mujeres, Hombres y Viceversa, Tengo una Carta para Ti and Got Talent, among many others)

The contortionists from the show SPACE; the ones who can make our hearts skip a beat with near-impossible moves involving a bar and a semi-circular receptacle full of water.
Ada Ossola‘s passion for acrobatics began with artistic gymnastics, a discipline in which she competed at a national level in Italy until the age of eighteen. After completing her studies in jazz and modern dance in Milan and Rome, she has worked as an acrobatic dancer for renowned theatres such as Teatro alla Scala in Milan, Teatro Verdi in Trieste and Apollo Varietè in Dusseldorf, for several major events in Italy, and also abroad at the ceremonies for major sporting events (World Championships and Olympic Games) as well as for music radio and concert events (Biagio Antonacci Tour).

Paola Quistini is also an Italian ex-gymnast, and accompanies Ada in the acrobatic Aquabowl and Pole show, a performance that combines dancing on a vertical bar and acrobatics inside a receptacle of water that is shaped like an open half-sphere.

You can still make it!

You’ve been meaning to see the show, right? Don’t hesitate, make a booking now! Purchase afternoon admission to Inúu if you would like to see both shows and enjoy a free cocktail under the moonlight, or book night admission to Thermoludic if you only want to see SPACE.
Whatever you choose, make the most of our summer nights!