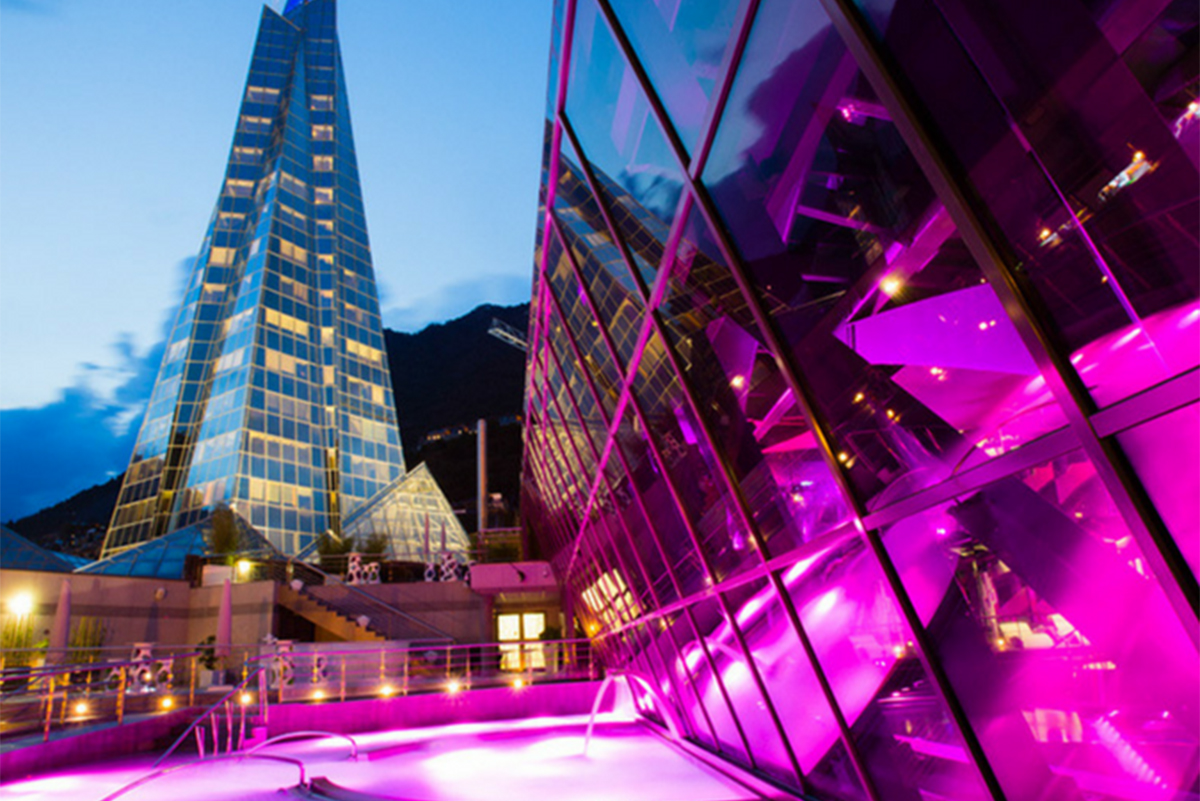 This year at Caldea we are celebrating our 25th anniversary. That’s hard to believe when one thinks of our avant-garde shapes and styles, because the passage of time doesn’t seem to affect Caldea!
In those 25 years we have revolutionised the concept of the spa, creating a new way of enjoying the thermal waters emanating from Escaldes-Engordany. We have broken away from the traditional thermal spas in order to bring thermalism closer to the general public, including children as young as three years old, for whom we have created Europe’s first thermal spa for infants. And since our beginnings, the innovative spirit has been flowing through our veins and in every drop of our waters.

We can assure you that 2019 is not going to be just any year for Caldea, because we’re going to celebrate our 25th anniversary in style! You’re coming, aren’t you?
We are preparing different activities so that we can share our anniversary with all of you. Outstanding among them will be the inauguration of the new and spectacular swimming-pool with panoramic views over the River Valira.
For the moment, we can’t give you any more details, but when the time comes, we’ll tell you everything through our blog and through the social networks. So look out for this information!

The Caldea tower, an icon of the Principality’s landscape

It is difficult to imagine the centre of Andorra without the Caldea tower.
We have to go back to 1984, when people began talking about the birth of a new thermal centre to promote the use of the natural warm waters of the area in a recreational manner, very different from the therapeutic use of the thermal waters in the traditional spas.
The project was initially planned to incorporate a building of stone and wood, modelled on the country’s Roman churches, but it took an avant-garde turn under the influence of Jean-Michel Ruols.
The renowned French architect designed an innovative building of ground-breaking aesthetics (not without controversy at the time), which has resisted the passage of time in the best possible way.
In 1994, Caldea opened its doors, thus giving birth to the first thermal leisure area, a spectacular construction in which the original tower, 80 metres tall, stood out, converting Caldea into the tallest building in Andorra and a symbol of its urban landscape

For our 25th anniversary, a new and striking swimming-pool with panoramic views

Now,in 2019, as we celebrate Caldea’s 25th anniversary, we are inaugurating a swimming-pool with panoramic views over the River Valira and a transparent floor, allowing one to enjoy marvellous views while benefiting from the relaxing properties of the water. The design of this new lagoon, which is suitable for everyone and has capacity for 50 people, will improve the comfort of our visitors and endow our premises with more variety.
The ‘panoramic’ swimming-pool, which will be situated in Thermoludic (in the space currently occupied by the Jacuzzi), will be equipped with lights, bubble-beds and other water-games, and will be inaugurated in September.
With the construction of this panoramic lagoon for its 25th anniversary, we at Caldea is demonstrating our ability to constantly innovate, and to enrich the experiences of our visitors by creating themed areas and services that are suitable for everyone. With its 25-year track record, Caldea is once more reasserting itself as the spa which is a reference in Europe and the world.

We again invite you to keep an eye on our blog and our networks.
As we have explained, 2019 is going to be a year full of festivities and surprises to celebrate our 25th anniversary.
Don’t miss it!